The Community of St. Mary
The Monastic Diurnal Revised
Annual Ordo
The Monastic Diurnal Revised (1989), with its companion the Monastic Diurnal Noted Revised (2015) is a contemporary adaptation of the Monastic Office, first defined more than fourteen centuries ago in the Holy Rule of St. Benedict. This edition is a revision of the English language version of the Day Hours and Matins Office prepared by Canon Winfred Douglas in cooperation with the Community of St. Mary during the early years of the twentieth century. Those twentieth century. Those volumes were a translation—with adaptations and provision for recitation in accordance with The Book of Common Prayer (1928)—of the Breviarium Monasticum, as revised and restored by its  Benedictine editors in 1925.

Why revise the Monastic Diurnal?

How the Diurnal is structured.

In this revision the editors have sought to apply St. Benedict’s principles to the needs of our times, both of individuals and of small religious communities with outreach work. The Hours have been simplified by a reduction of repetitions and particularly by a combination of Matins (the ancient Night Office, not contained in the prior edition of the Diurnal) and Lauds. In keeping with modern Benedictine usage, Prime as a separate office is omitted. In addition, the other traditional “Little Hours” of Terce, Sext, and None have been simplified. Like other modern revisions, this book does not attempt to retain St. Benedict’s recitation of the entire Psalter every week. Unlike others, however, the psalm distribution normally associated with Benedictine Little Hours, Vespers, and Compline has been retained ﻿on a weekly ﻿cycle. The remaining Psalms are used at Matins on a monthly cycle.

The Monastic Diurnal has five parts:

The Psalter contains the basic Office for Sundays and weekdays. This Office is used for Sundays, ferias, and lesser feasts in all seasons; the Saturday ferial office incorporates the traditional Office of St. Mary.

The Proper of Seasons contains all the variable parts of the Office for the seasons of the Church Year according to the usage of the 1979 Book of Common Prayer (Except for the proper offices of Maundy Thursday, Good Friday, and Holy Saturday, which are found in a separate Volume II). Rubrics provide detailed directions for use. An Ordinary of the Season is provided for the seasons of Advent, Lent, and Paschaltide. 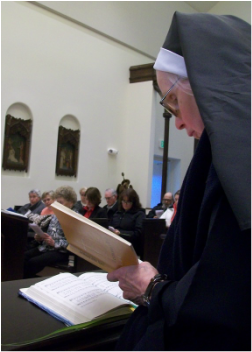 The Common of Saints contains the entire Office for a saint’s festival under the headings of Apostles, Martyrs, Holy Men, Holy Women, and The Blessed Virgin Mary. The Office for commemorating the Dedication of a Church or a Monastic House is also included in the Common.

The Proper of Saints provides all the variable parts of the Office for commonly observed saints’ days, according to the current usage of the Eastern Province of the Community of St. Mary, together with directions for their use. Full provision is made for all Feasts of our Lord and other Major Feasts of the 1979 Book of Common Prayer, and most of the lesser feasts and other observance of the Episcopal Church will be found as well (although the collects are not in every case those contained in the 1980 edition of Lesser Feasts and Fasts).